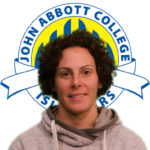 Recently named to the coaching staff of the Quebec U-18 team, she is also an assistant coach with the Canadian U-18 team and the Technical Director for Lakeshore hockey.  After graduating from College St-Laurent in 2003 she attended to the University of Minnesota-Duluth where she graduated with a Bachelors Degree in both Community Health and Physical Education.  She was named to the WCHA All-Academic Team in 2004, 2005, 2006 and 2007. In Minnesota Noemie was an alternative captain in 2006 and the captain in 2007 when the Bulldogs lost to Wisconsin in the national championship in 2007.  Noemie was a finalist for the Patti Kazmaier Award (NCAA Player of the Year) in both 2006 and 2007 and the MVP of the NCCAA Frozen Four Skills Competition in 2007. She currently plays professional hockey for the Montreal Stars in the Canadian Women’s Hockey League.  The Stars won the Clarkson Cup in 2009, 2011 and 2013 and this past season Noemie led the Stars in goals scored. She was also part of the Canadian Women’s Hockey National Program from 2005 to 2012 including playing for the Canadian Hockey U-22 Team in 2004 and 2005. “I am very thrilled to join this hockey program. There is nothing more exciting in coaching than working with young athletes whose desire is to learn and get better “commented Noemie.